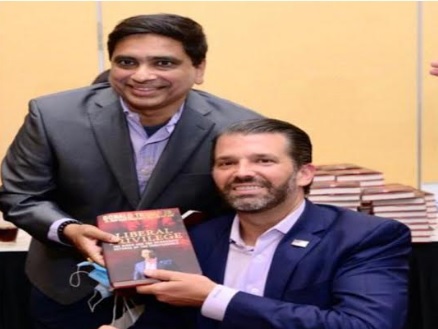 Al Mason, the Co-Chair of the Trump Victory Indian American Finance Committee, said at a major event of exclusive gathering of top Indian American Community Leaders, backed by the billion dollar multinational SRAM & MRAM Group, headquartered at UK, in New York earlier this month, said that Indian-Americans have become a force to reckon with and President Donald Trump understands their power particularly in the battleground states, and can play an essential role in getting Trump re-elected.

Mr. Bhagi Nanda Sandilya with Mr. Donald Trump Jr. at the success of the book “Liberal Priviledge” at New York

Given his equal treatment of Prime Minister Modi on the world stage, President Trump has respected the Indian-Americans like no other. He continues to echo this sentiment consistently.

Having elevated India’s stature by establishing rock-solid Indo-US ties, President Trump has assured a lasting bond between the world’s largest and oldest democracies.

President Trump has proven his unconditional support to India and PM Modi’s tough yet necessary policies regarding Kashmir and Radical Islamic terrorism. President Trump’s side by side appearance at Houston’s Howdy Modi event was an indication of this support.

President Trump has been the only US President to standby by India in face of China aggression and supporting the Republic of India by visiting the country and extolling its people, culture and contribution to the US and the world.

Most Indian-Americans still fondly regard India as the motherland and have some roots still there in terms of relatives and connects. Trump’s support of India against China is a deterrent for China to start a war with India.

The success of the 4-More-years video launched by Donald Trump Jr. and Kimberly Guilfoyle underscores the emotional bond the first family has established with Indian-Americans across the country, The more than 25 million views is proof of a mutually connect.

Under President Trump, the US economy is at an all-time high, outperforming previous records even during uncertain times. Unemployment continues to fall and the efficient handlings of eradicating COVID-19 are all factors of a strong committed leader who can get the job done!

“I am so proud that in a recent event President Trump in front of all, praised Al Mason by saying “Al Mason is very dedicated, my dear friend and will not forget his efforts to make me win,” said Hemant Bhatt a member of Indian Voices For Trump Coalition.

“Our Campaign activities are vastly different to Democratic party-perfect messaging structured with a public view not political or personal views which resonates in all our activities otherwise, How else do you see 30 million impressions thus far possible on this video “4 more years” plus grass-root level contributions,” exclaimed Sridhar Chityala, Indian Voices for Trump Advisory Board Member.

“Indian community is with Donald Trump for his clear vision towards building the economy and job creation. President Trump’s commitment to strengthening US Indian relations is also commendable, and in this U.S. Elections, it is going to get showcased,” said Bhagi Nanda Sandilya, an NJ based entrepreneur and vice-chairman of Gandhi-Mandela Foundation, United States. Praising President Trump’s tenure in White House, Nanda also said, “President Trump is only President in last 47 years who has created peace without firing a bullet, real Middle East peace deal maker.” 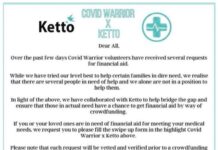 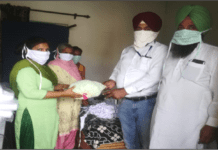 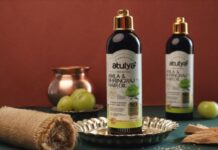